The more things change, the more they stay the same

Getting change management right - a guest article from Steve Koutros

Monsieur Karr said: “The more it changes, the more it’s the same thing.” His saying has been popularized to mean: “The more things change, the more they stay the same.” This is perhaps an apt starting point for an article on change management.

Discussions on change management are as frequent as gossip on the next new Apple product, and are often as lacking in tangible knowledge. Here, we hope to set some of that to rights, and perhaps the best way to do so is to discuss change management through example.

The SSC was originally designed and implemented by a third-party consulting group, and had been set up by taking the F&A employees from six divisions and putting them into one office at a brownfield (existing client office) location. After a year, the third-party consulting company was called back in to try and fix the situation. The problem remained, only getting worse.

The primary issue was simple: 124 employees were moved into an SSC, 25% were let go, and there were no expectations set with the clients: they had not been informed that the services would be anything different than they had received in the past.

When we entered the picture and spoke with the senior executive and business line owner, we immediately established three tasks:

We set these priorities because it is vitally important that all parties in a project are asked their opinions and that information is then shared with them in an appropriate manner. Even though it was going to be difficult for the client to agree to a communications plan, understanding the corporate culture was vital. In this case, the clients were not in a culture where they were used to having high-profile communications about failed projects that were going to be corrected. The stakeholders were: Corporate Executives (CE), SSC employees (ESSC) and the Client’s of the SSC F&A Managers (CSSC).

Focused interviews are critical as a starting point for any project. Gathering opinions and reporting back to stakeholders is imperative for a project to be successful. As a result of the interviews we conducted, we created a draft Project Definition and Listing of Goals. We validated this with all stakeholders at our kick-off meeting.

Among other things, we agreed with the Steering Committee a list of eight objectives:

Each of the eight objectives, should be clearly defined using the SMART technique. SMART stands for Specific, Measureable, Achievable, Realistic and Timely. Let’s take one of the eight and create a SMART definition. Form a powerful guiding coalition: Project X will ensure that all managerial stakeholders (CE, ESSC and CSSC) are part of the decision making process by publishing the monthly actions and decisions (agreed to weekly) to all concerned as well as the mutually agreed to updated communications plan. Translated: The stakeholders are the coalition who is empowered to act and decide in a timely fashion (monthly) for the entire project team.

The first phase of the project lasted for six months and was set up to design, and gain agreement with, the CSSC on the ‘contract’ for services, which included a statement of work, service levels, and pricing. The high-level project plan consisted of three phases:

Many things in the project were very successful. We will give one or two examples here.

1. We created
continuous buy-in through workshops, communication letters and communication via e-mail, telephone and face to face. In addition, between the time of the first workshop and last workshop there were bi-weekly meetings with clients and SSC employees to continually validate the ongoing work.

2. The project team worked as a real team, along with ESSC management. This being said though, it is important to remember that you cannot please all stakeholders all of the time. Sometimes, an executive needs to make a decisive decision that won’t please everyone.

Some pushing over the top was needed to get everybody to look in the right direction (top management commitment). This had some positive effects. Having people think that they thought of the idea is far better than telling them the probable right solution. You can use the phrase, “thinking out loud… might we consider X?”

Remember that problems resolved quickly for 80% are far better than problems resolved 100% within a couple of weeks. Don’t be afraid of telling people, “Look, we heard your issue, we wanted to act quickly so this may not be the 100% solution but let’s work together to resolve as needed.”

What does this case study show us?

The corporate culture in this case example was a very open, transparent and direct one. During a Steering Committee meeting, the Corporate Controller stated that he wanted a “dial tone” service, a black box and that the level of employees staffing the SSC do not need to be the best. We challenged this assumption on his part. We suggested that an employee’s career could be enhanced with an assignment to the SSC including potential future managers. Imagine if the SSC were perceived as the place to earn your ‘stripes’. There were nodding heads around the table when the light bulb went off – we can turn this parking lot into a ‘leaders’ place to be. It was a mind-changing shift in perception for the Executives.

This brings us back to Monsieur Karr: the more things change, the more things stay the same. Change management done well should be transparent. It is properly integrated into the project itself and not as a separate workstream.

Yet remember that what works well in one company may not work so well in another. Change management should be aligned to the specific company and tailored to each project. Even though the approaches may be different, they should still be consistently applied.

Approaches can and should be different. The results should not. 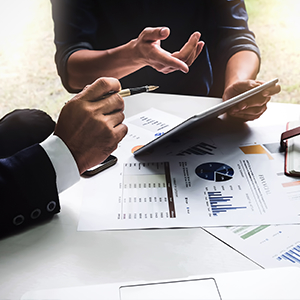 A day in the life of an a-connecter #1